Today was the first day we travelled off campus as a group to explore the Jamaica Defense Force Military Base. This experience provided us with so much information and insight to how important the military force is to the people of Jamaica.

The day began with a presentation from Major Basil Jarrett who specializes as a liaison for JDF to connect the military and communities and focus on situations that require military aid. For example, he discussed the fact that a James Bond movie is currently being filmed in Jamaica and he authorized military presence to provide security and immediate help if injured. In his presentation we learned about the roles and responsibilities of the JDF. Some of these responsibilities include: defending against external aggression, disaster relief and recovery, counter-terrorism, peace support and much more. From a criminal justice standpoint it was interesting for us to consider how prevalent the military is here in Jamaica compared to Canada. A reason for this has to do with the fact that police corruption is a challenge for the people of Jamaica, therefore citizens rely on the military as oppose to the police. An interesting fact discussed was that the JDF is the most highly respected institution in Jamaica. More than the police, politicians, the church, etc. The Jamaican Defense Force provides a 1 year training recruitment program aimed to be an outlet for at-risk youth to replace the structure of gangs with the structure of military. After one year, the trainees can either become a member of the JDF or use it on their resume which provides more opportunity for employment. This training is required to become a member of the Jamaican Defense Force. 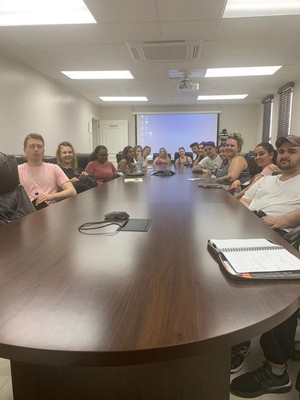 Following our presentation from Major Basil we were given a tour of The Jamaican Military Museum. When we first entered the museum there was a World War 1 exhibit which they will be changing into a new exhibit soon. The exhibit gave examples and insight into what the World War 1 experience was like for Jamaican soldiers (life in the trenches). Unfortunately, we were only able to take photos in this first exhibit but the other room exposed us to a deeper history of the Jamaican military. This included artifacts dating all the way back to the Tainos people of Jamaica who made arrowheads out of stone. Other artifacts included the first uniforms, tanks and cannons. This was interesting because we were able to learn about the history of these important artifacts as well as the history of the Jamaican military.

For lunch we travelled 10 minutes down the road into New Kingston where there were multiple food options. Some options included familiar fast food chains (Burger King, KFC, Starbucks) while some included authentic Jamaican food. Here is a photo of my lunch from Island Grill - Jerk Chicken, Rice and Peas, Cherry Juice and French Fries. It was delicious! 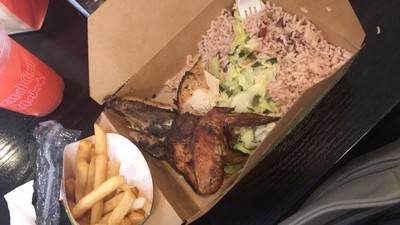 Returning from lunch we were given the opportunity to attended another presentation from a Major of the 1st Battalion who focused on the Zone of Special Operations, specifically in Denham Town. In July 2017, the Law Reform Act was passed in Jamaica enabling the ZOSO (Zone of Special Operations) Act. Zone of Special Operations is a crime fighting tool that is used in communities of very high levels of crime. Criteria of a zone includes the presence of gang warfare, rampant criminality, escalating violence and murder, threats to the rule of law and public order. Denham was the second ZOSO put into place starting on the 17th of October 2017. In the specific area of Denham Town where ZOSO is in operation there are 12 active gangs in a population of 8,500 people. ZOSO has 3 phases are focused on bettering the community. These phases are: 1. Clear (Clear of zone of wanted individuals and illegal weapons), 2. Hold (Prevention of re-entry), 3. Build (Maintain). Since the declaration of ZOSO the military has maintained presence and reported a decline in serious crime. ZOSO is a joint force including the Jamaican Defense Force and police.

After an informative day at the military base we returned to campus where we had a group debrief of all the information learned today. It's interesting having these discussions with students from a variety of different social science programs to gain different perspectives. Overall it was a great opportunity and would 10/10 recommend.